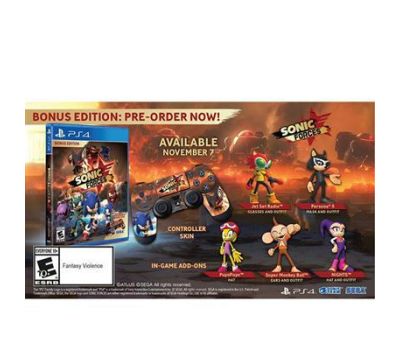 Sonic Forces Bonus Ed PS4 : Sonic Forces follows Sonic the Hedgehog as he leads a resistance force against Doctor Eggman, who has taken over the world with the help of his robot army and a mysterious new villain known as Infinite. Gameplay is similar to Sonic Generations with players controlling "Classic" and "Modern" versions of the titular character; the former plays from a 2.5D side-scrolling view reminiscent of the original Sonic games on the Sega Genesis, while the latter uses three-dimensional gameplay similar to Sonic Unleashed and Sonic Colors. In addition to the two Sonics, Sonic Forces also introduces a third gameplay mode featuring the "Avatar", the player's own created character. Bonus Edition includes Game, Controller Skin, and FREE SEGA Classic & Current DLC Accessories Code